When we were unable to be together because of COVID-19, we put together this resource so that you could remotely participate in communion with us as a church family. You can read the guide below or download the PDF file to download the guide for offline use.

Communion is a symbolic way to show we belong to Jesus and to remember what he did for us. We’re forgetful people, so it’s a regular remembrance and celebration of the Lord's sacrificial death. The breaking and eating of bread has to do with Christ's body being broken on the cross. The drinking from the cup has to do with the shedding of Christ's blood whereby we are forgiven. (Matthew 26:26-28; 1 Corinthians 11:23-24)

Communion was originally celebrated by God’s people as the promise of his protection during the Passover (Exodus 12). Then Jesus redefined the celebration of the Passover. As he and his disciples gathered to eat and remember the purpose of the Passover, Jesus made a new promise:

"He took bread, gave thanks and broke it, and gave it to them, saying, ‘This is my body given for you; do this in remembrance of me.’ In the same way, after the supper He took the cup, saying, ‘This cup is the new covenant in my blood, which is poured out for you" (Luke 22).

Jesus promised to spare us eternal death and cover our sins by his own blood. Breaking his body and pouring himself out so that, if we believe, we can have a relationship with him forever. The promise offered as protection during the Passover was a dim reflection of the great promise Jesus made and fulfilled — a promise of life forever.

The early believers celebrated together on a regular basis.

"They devoted themselves to the apostles' teaching and to the fellowship, to the breaking of bread and to prayer. Everyone was filled with awe, and many wonders and miraculous signs were done by the apostles. All the believers were together and had everything in common. Selling their possessions and goods, they gave to anyone as he had need. Every day they continued to meet together in the temple courts. They broke bread in their homes and ate together with glad and sincere hearts, praising God and enjoying the favor of all the people. And the Lord added to their number daily those who were being saved" (Acts 2:42-47).

Here are some practical steps that you can use to lead your family in communion:

Get your communion elements and plan ready. There should be some type of bread element and some type of juice element. Think about what you are going to say or read to lead your family. Know how you’ll pass these elements out to your family. Also, prepare the atmosphere. Communion can be a reflective time, but it can also feel celebratory. Communion may need a little explanation—don’t expect everyone to know what to do. Communion is meant to be personal, yet a shared experience. If it works for your family, you may want to sing a song together.

A big part of communion is remembering and reflection. Remember the sacrifice and promise that Jesus has made. You may want to read a Scripture passage—here are some ideas:

Communion should also involve personal reflection. It’s a time to examine our relationship with the Lord and with others.

"Therefore, whoever eats the bread or drinks the cup of the Lord in an unworthy manner will be guilty of sinning against the body and blood of the Lord. A man ought to examine himself before he eats of the bread and drinks of the cup. For anyone who eats and drinks without recognizing the body of the Lord eats and drinks judgment on himself. That is why many among you are weak and sick, and a number of you have fallen asleep. But if we judged ourselves, we would not come under judgment. When we are judged by the Lord, we are being disciplined so that we will not be condemned with the world" (1 Corinthians 11:27-32).

Give instructions to your family on what to do and when. Following the example in Scripture, we eat the bread, followed by the cup. Feel free to offer prayers or praise in-between.

Thank God for what he has done and his promises to us with prayers of gratefulness, joy, and hope. It’s great to pray individually, but there is something special about leading a prayer out loud with the group. Also, feel free to gather around people in your family with needs and lift those up together!

Communion should lead to praise. Jesus has made a way for us to receive forgiveness and life! Often communion is a joyous celebration—a fun reminder of our great God. We don’t have communion because of obligation. We have communion as a proclamation of Jesus’ promise of salvation.

This resource was adapted for Evangel using an online resource from EpicChurch in Philadelphia (https://epic.church) 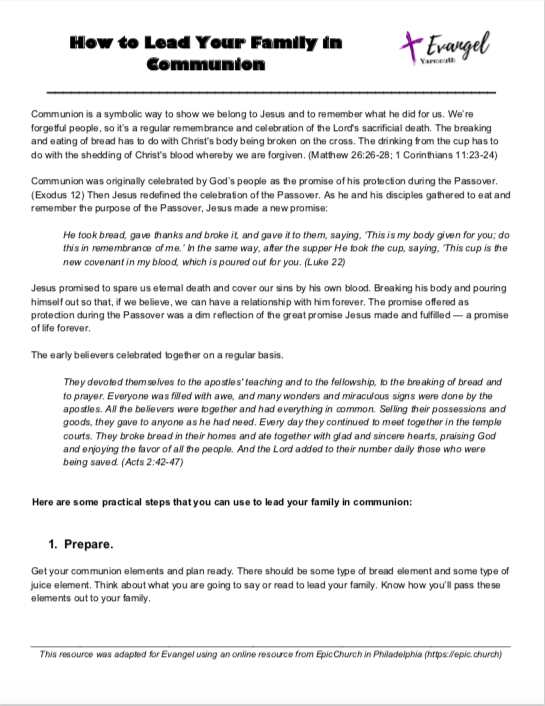 Click below for a pdf copy of these communion guidelines: